Everyone knows the quarterback is generally the biggest factor dictating an NFL team’s success.  There are obviously high expectations for Dolphins QB Tua Tagovailoa this season, but the ultimate success of this team relies on co-offensive coordinators George Godsey and Eric Studesville.

Everyone knows the quarterback is generally the biggest factor dictating an NFL team’s success.  There are obviously high expectations for Dolphins QB Tua Tagovailoa this season, but the ultimate success of this team relies on co-offensive coordinators George Godsey and Eric Studesville.  With the stellar defense the Miami Dolphins had last season, Brian Flores will need his recently promoted assistants to bring the offense up to the same level to win games this year.

In the NFL, the quarterback is king.  A great quarterback can take a good team to a great team and hide deficiencies on both sides of the ball.  Patrick Mahomes, Tom Brady, and Aaron Rodgers have proved countless times throughout their careers that a subpar team can go deep in the playoffs with their help.  Why then, is offensive coaching still king?

If we look at the 2020 season, the best offenses without “proven” quarterbacks showed countless examples of why the right scheme matters.  Derek Carr, Ryan Tannehill, and even Kirk Cousins and rookie Justin Herbert led top 10 offenses in terms of yardage with each of their respective teams putting up over 6000 total yards.

While each is a solid quarterback, it can reasonably be inferred that the scheme they are in has a phenomenal impact on their success. Let’s take a look at the Raiders for example.  Before offensive guru John Gruden joined the team in Las Vegas, Derek Carr had never put up more than 4,000 yards in a single season.  He has now broken that threshold in all 3 seasons since.

He’s also averaged only 9 interceptions per year compared to 11 over the previous 4 seasons.  Gruden has also developed one of the top running backs in the league with Josh Jacobs eclipsing 1,000 yards in each of his first two seasons.  Coaching matters.

The Titans are another great example of what incredible offensive minds can do for an NFL team.

While Tannehill’s passing yards are fairly on par with what they were on the Dolphins, he has thrown only 13 interceptions while starring in a new offense for the Titans.  The impressive rushing attack and play action offense developed by Mike Vrabel and Arthur Smith has turned the Titans into a top 5 offense in the NFL.

When we look at the Dolphins, we can see the talent and potential oozing at every offensive position.  Without proper coaching however, all that will ever be talked about is potential.

If the Dolphins want to make the playoffs this season, the coaching staff of Godsey and Studesville will need to milk every ounce of that potential from each player on the roster.  This will include not just Tua, but the offensive line, running backs, and fresh new receivers. 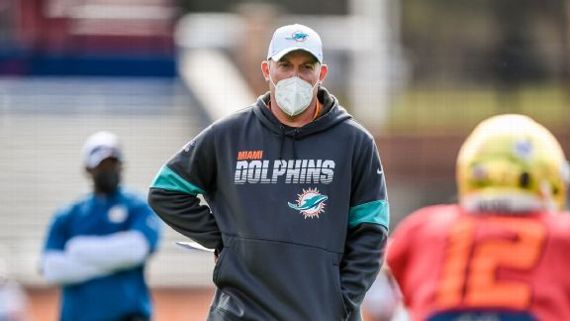 Godsey’s NFL coaching experience began in 2011 as an assistant for the New England Patriots after a seven-year college coaching stint at UCF.  In 2012 he was named tight ends coach under offensive coordinator Bill O’Brien, who he followed to the Texans in 2014 to become quarterbacks coach.

Godsey then gained experience as a quarterbacks coach for the Detroit Lions before leaving to coach tight ends for the Dolphins under Brian Flores in 2019.  In March, he joined Studesville in being named as co-offensive coordinators for the Dolphins.

Studesville has an impressive resume of NFL coaching experience beginning in 1997 with the Chicago Bears as a running backs coach.  He has since coached running backs for the Giants, Bills, and Broncos.  Studesville also served as interim head coach for Denver in 2010 after Josh McDaniels was fired.  J

oining the Dolphins in 2018, he was kept on the team after a regime change from head coach Adam Gase to Brian Flores.  Studesville has had many great backs impress under his tutelage including names like Tiki Barber, Willis McGahee, Fred Jackson, and Marshawn Lynch.

The run game will need to be a whole lot better this year.  Myles Gaskin showed promise last season, and the coaching staff needs to ensure that he can find holes by coaching up the young offensive lineman.  Both Godsey and Studesville have loads of experience with running backs, and I expect to see that on display with a plethora of different skillsets in the backfield.

Malcolm Brown was a solid addition in the offseason, and I expect the co-offensive coordinators to get a lot more out of him than what was seen with the disappointing Jordan Howard and Matt Breida last year.  Watch out for Salvon Ahmed to break out as well, he has more talent than many might expect.

The Dolphins coaching staff will need to learn from the mistakes from last season to progress this year.  At times last season Tua seemed to be limited to certain play calls and short yardage passes under former offensive coordinator Chan Gailey.

Godsey and Studesville will need to let Tua rip it and throw to his speedy receivers downfield.  Tua has great pocket awareness and accuracy, and the coaches must allow him to put this on full display.  The coaching staff needs to instill confidence in the young QB by helping him learn to make calls at the line of scrimmage, gain more confidence in the playbook, and trust his instincts.

One thought on “Nothing will affect the season of the 2021 Miami Dolphins more than this one big thing.”

It’s clear the Atlanta Falcons roster is in a massive overhaul. Losing Matt Ryan was … END_OF_DOCUMENT_TOKEN_TO_BE_REPLACED

With trade rumors swirling around Kevin Durant, the Sixers could be in position to add … END_OF_DOCUMENT_TOKEN_TO_BE_REPLACED